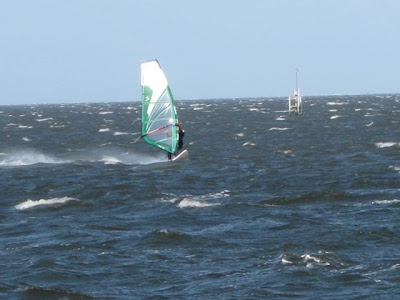 Rented a house in Island Creek behind Windsurfing Hatteras with Raav, Ted, Carl, Chris B, Dan. Contos came in for a night. Billy, George Lam, Wayne and Bob R, were renting a house 2 miles south. Thursday was dead with a slight 7.0 session in the evening. Went to visit Billy Thursday night and narrowly avoided getting a DUI thanks to Contos and his quick thinking (telling the officer where we were headed using street names.) Friday started off with 7.0 in the sound out of the northish. Raav was testing the Quatro 105 FSW then the JP FSW 101 then the Quatro Fast Wave 100. He ended up with the JP. Not a big surprise. Afternoon session was 6.0 at Ego beach and was fun. Some good jumps but the wind was marginal. Saturday was 5.0 and 6.0 all day and we stayed on the sound, sailed the reef and whatever. Sunday morning was 4.0 out of the North. The reef was pretty crazy, with Raav and Carl getting HUGE air and great wave riding and some big airs for me. Raav broke his boom so we cut the session off early only to be stuck in Rodanthe by water blasting through and flooding the road at S-Turns. Dan missed his flight out by like 4 minutes and the Sox lost the ALDS. Good trip, back to RRHF. 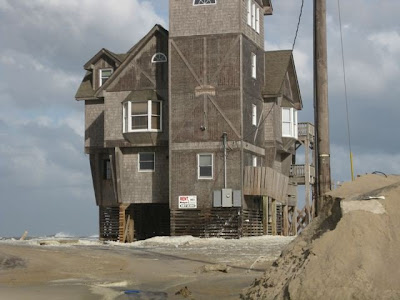 Nothing like catching it big on your last day...congratulations.

What does Hooper sail?

He prefers to surf longboards in ankle to shin conditions up in Corolla (NC).