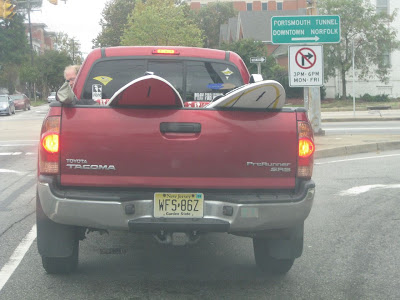 Photo by Raav on the way.

NW wind blowing 30-35. Contos insisting it's 18-24. Britt complaining that his wave board is too turny (huh?), Jack rigging his skate sailing gear (ballsy), and Rob "Raav" Spurgeon asking not to be made fun of for wearing a 5/3 full suit (it's a Pro Limit-WOW-with rubber skin so the wind can't cut through it and it's soooooooo comfortable). Tide going out. Waist high breaking swells to the West, Chest high breaking and non breaking swells on the bar and head to logo high waves up by Lynnhaven Pier. The sailing was as follows: Launch on starboard and pinch across the channel. It was fluky inside. Jibe just before the opposite shore and blast out towards the pier while looking for Raav who went out first and is wound up on his 4.2/85l FSW. Completely jacked on 4.4/74l. (with an 8.25" fin Mr. Contos). All the port tack jumps you wanted on the way across to the pier. Most over 10', some over mast high. Say like about 4-5 per run. Then you get to the waves at the pier. Find a nice one just about to break and jibe on its face and ride it backside on starboard as longs as possible while attempting to smack the lip backside a-la-Karl Quist. Blast back across the bar hitting lips, and generally backside riding as much as you can. When you cross the bar the swells spread out and create perfectly smooth jibe-a-toriums. Insert jibe of choice here. At this point you have probably worked you way upwind too much so you attempt to head back on a broad reach towards the pier without scaring the shit out of yourself. You then proceed to hit the port ramps again going way too fast but what the hell? Find Raav and flag him over and advise him to get off the 85l FSW which must be like sailing a formula board, and onto the 72l Maui Project. Sail out from the breakers on the inside of the pier. Avoid that big plastic thing floating near the bar. Prepare to Jibe. Wonder where everyone else is. Repeat.
Also Rob from DC/England. Great sailor, hit a few starboard fwds.
Posted by CRL at 7:25 PM